Once upon a time, when I was much stroppier than I am now, I would have looked down my nose at adults playing with dolls houses – I thought we should all have more important things to do.  But these days I am more tolerant, and also more susceptible to the magic of small worlds.  Which is why it is that I am at the Museum of Childhood in Bethnal Green, to see the exhibition there on the history of dolls houses.

Twleve miniature houses, beautifully furnished and maintained;  twelve small worlds, each packed tight inside four walls;  and each of these twelve, imaginary world within the bigger (but still imaginary?) world which is the Museum.

i thought the experience would be for children (which it is) but only for children (which it isn’t), so I am pleased to discover the threads of pathos and sharpness that run through the dolls house story – because who wants sweetness without the sour?  For hundreds of years women were only entitled to own ‘moveable property’, including cupboards and clothes, so miniature houses were the closest they could get to owning a home. Dolls houses were idealised worlds into which women could escape, and places where women could turn their lives into stories.  In other words, three-dimensional memoirs. Dolls houses and storytelling are intimately connected.

And it’s a piece of history in which women are disproportionately represented – as owners, makers and collectors – because the dolls house touches us twice, reminding us of our own childhoods but also of our children’s childhoods.  In their way dolls houses are a feminist story.

Dolls houses work on us because of the strange charm and power of miniature-ness, which evokes secrets, hidden treasures, the Borrowers, love letters, riddles, origins, beginnings, childhoods – in fact, all things magical.

And they also imply microcosms and miniature worlds, and connect me to one of the reasons why I like museums so much, for their quality of being the entire universe captured within the four walls of a building. In fact dolls houses and museums share lots of qualities in common. Each lures us in with the promise that one day we will build a complete and perfect worlds within those walls.

For such small things it’s amazing how much meaning and mystery they squeeze inside them.

So if you are seeing an echo of a dolls house in the design of the Museum of Marco Polo – with its front page that suggests boxes, walls and rooms – well then, you would be exactly right.  When we first started the Museum of Marco Polo I was startled by the toy-like quality that websites can have (and I mean this as a compliment) – as well as by the spontaneity of the medium. For someone who once looked down on adults playing with dolls houses, I have fallen entirely for my own museum-website with its dolls house connotations. 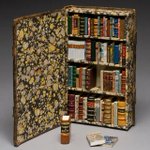