Museum of Marco Polo goes over the Andes

We have been invited to Latin America to teach museum-making skills in Buenos Aires and Santiago. So first to the suburbs of Buenos Aires where behind tall gates and among tall trees we find the Villa Ocampo.  At first sight we could be looking at an English country house – until you see the strangeness of the luminous southern light dappling the shadows across the grass.  It was here that Victoria Ocampo published a magazine called ‘Sur’ for more than fifty years.  ‘Sur’ was the first literary magazine in Latin America, and over the decades published most of the world’s great writers, including Jorge Luis Borges, Albert Camus, Andre Malraux, Antoine de St Exupery and Graham Greene. Those who wrote in English Victoria translated into Spanish, so that their stories could loop on round the southern hemisphere, mingling and transmuting and seeding in other cultures.  The Library still contains 12,000 books and letters, as well as copies of every edition of ‘Sur’.

And from the Villa Ocampo, we go on across the Andes and down into Santiago, where we go to Pablo Neruda’s house, which is a collection of blue and yellow painted shacks that sprawl across the hillside outside Santiago.  It’s a poet’s house, full of shady corners, uneven steps and earthen patios where Neruda cooked up barbecues for his dinner guests.  Sit here and you can eavesdrop on the ghosts of all his guests, as well as witnessing how Cubism collided with Latin America and was transformed into something else. When Neruda won the Nobel prize he went to Paris from where he bought back home to Chile a first edition of Diderot’s Encyclopaedia. And so another object made an unexpected journey and another path was traced, from south to north and back to south again.

Read the first chapter of Neruda’s Memoirs and you will find the following passage about his childhood in Temuko, which is south of Santiago and was once a frontier town and the country’s southern-most outpost:  ‘The rain was the one unforgettable presence for me then.  The great southern rain coming down like a waterfall from the Pole, from the skies of Cape Horn to the frontier.  Sometimes it rained for a whole month, for a whole year.  Threads of rain fell like long needles of glass snapping off on the roofs or coming up against the windows in transparent waves, and each house was a ship struggling to make port in the ocean of winter . . . The southern rain is patient and keeps falling endlessly from a grey sky.’

Thanks for this lovely Instagram review of #TheMuseumMakers by nightfallmysteries Writers need readers. Without readers writers are doomed 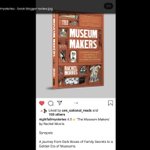 Absolutely agree. Am looking forward to him writing a few literary-ish novels where nothing much happens for 300 pages

“Life is a very bad novelist. It is chaotic and ludicrous.” —Javier Marías https://t.co/oD11yAySya

And did I mention how great is a grown up book with pictures? When did that fall out of fashion? Why can’t they all have pix? ⁦@isabelgreenberg⁩ ⁦@septemberbooks⁩ 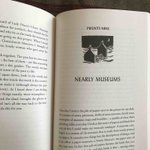